It's here to stay!

Emerald Ash Borer
You might ask, what is here to stay? Is it high gas prices, or that visiting relative that doesn't want to leave, or even that added post-Christmas weight? Nope. All of those can be dealt with in their own way. What's here to stay though is Agrilus planipennis, commonly known as the Emerald Ash Borer (EAB). What was once a pest in its native homeland of Asia, EAB continues its destructive path throughout the upper Midwest and right here in our Catholic Cemeteries. First discovered in upper Michigan in 2002, this exotic pest is thought to have imported itself via shipping crates from Asia very similar to the former exotic pest, the Asian Longhorned Beetle (ALB). What are startling, though, are the statistical differences between the two. While ALB destroyed over 1,500 trees in the Chicagoland area, EAB has destroyed over 20,000,000 ash trees in Michigan alone and over 25,000,000 nationwide. Currently at the Catholic Cemeteries we are vigilant in combating this pest and once the symptoms shown its ugly self, we have no option but to remove the infected tree.
Biology of the Pest

Generally speaking the EAB has a life cycle of one year and in colder climates it could have a two year life cycle. What that means is that the pest only lives for one year but only after reproducing at a prolific rate. Let's start with the month of May and progress through its development. Around the middle of May the larvae (that had overwintered in the trees inner recesses of the trunk, technically speaking the phloem which serves to transport nutrients throughout the tree) emerge as adult beetles and begin looking for their mates.

D-shaped exit hole
At this time one can see D-shaped exit holes on the trunk from the exiting of the adults. Shortly after that (mid-July) the females begin laying their eggs in bark crevices and then the eggs hatch in 7-10days. The newly hatched larvae then chew through the bark and begin feeding and burrowing through the phloem tissue and it's at this time that the tree really starts showing signs of destruction such as the dieback of entire branches. Also one can see shoots (epicormic) emerging from the bases of infected trees. The infected tree is doing this to compensate for the loss of the mature branches. But this endeavor proves futile. Within a short time the tree loses its battle. Then the larvae overwinter inside the trunk until the following May when the process is repeated again.
What's at risk at the Catholic Cemeteries? 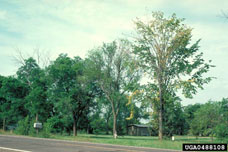 Our ash trees are at risk
ALL our ash trees! In 2010, we did an in-house inventory of tree species located throughout our 18 major cemeteries. At that time we were surprised to find that some of our cemeteries have an ash population of 30%, 13% when averaged for all 18 major/large locations. You might ask why were so many ash planted at in the past? There were many reasons for this. One is that an ash tree can adapt to most environmental conditions. Another reason is that they also grow at a moderate rate and when mature provide needed shade. And yet another reason was easy availability. Currently we have not planted one ash tree since 2005 at our Catholic Cemeteries.
What can I do to help stop the spread of this pest and what are the Catholic Cemeteries doing?

First off never plant another ash tree again. Never. Secondly, never move firewood within or outside the state. If you do burn the firewood when camping, buy the wood locally and burn it all before leaving. Thirdly, when a tree shows signs of EAB, remove the infected tree as soon as possible. That is currently our management strategy at the Cathoilc Cemeteies. And always remember that the only 100% proven control measure for EAB eradication is the removal of infected trees. 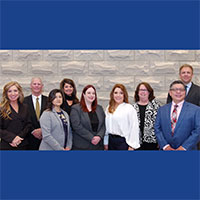 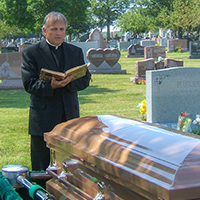 Find which of our 47 locations is closest to you.
Read More...

Catholic Cemeteries is committed to assist, explain and educate Catholic families, parishes and other agencies of the Archdiocese, through its outreach programs.

When a death occurs, life for those who live on changes forever.